Emerson’s grave is the least appealing of the bunch: a big, honking chunk of quartz, bearing an unreadable plaque, and almost literally overshadowing the smaller stones around it.

The effect is not a happy one. I counted only 3 writing instruments, a few stones, and a piece of paper with a somewhat ugly design. It’s almost insulting to the visitor—a kind of enforced admiration. 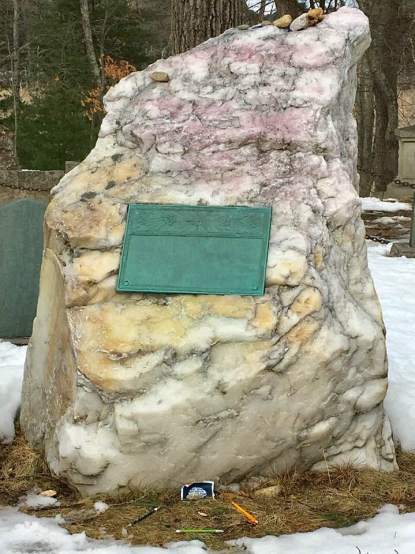 Emerson’s grave doesn’t feel very human, but, then again, neither does he. Although I read his essays quite often, and have used plenty of quotes, Emerson himself is stand-offish, pedantic, and, in the case of “Self Reliance,” maddeningly privileged.

The account of the funeral in the Concord Freeman is as overwrought as the grave. “The world mourns for the loss of genius,” according to the Freeman, which seems somewhat overoptimistic, if not actually parochial.

Here, for half a century, he walked up and down among the people, grandly, yet humbly; thinking and living at times in a realm far above and beyond the people, yet like all truly great men, in sympathy with his surroundings…

Aloof. Grand. Imperial. Just like the rock that weighs down his grave. No wonder the offerings are so sparse: Emerson invites our interest, but not our affection.

For other graves in Sleepy Hollow, see Thoreau, Alcott, and Hawthorne.

View all posts by rmgosselin

RMGosselin is Associate Professor of English at a community college in western New York state.