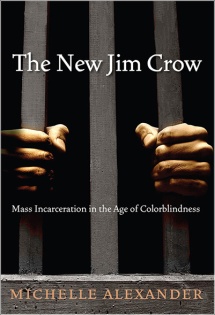 The New Jim Crow, Michelle Alexander’s 2010 racial critique of mass incarceration, is back in the news, thanks to a New York Times article on the surprising decision by North Carolina prisons to remove it from a banned books list.

I had an adventure with that book, myself.

A few years ago, I offered to loan my copy of the book to a new student, provided, of course, I could get permission. I emailed the director of education, and she told me to leave the book at the front gate with her name on it, so that she could make sure it would be allowed.

That night, the officer at the gate told me to carry it back to the school building, and leave it at the desk there. That officer, though, must have known I was coming. He promptly took it away from me, and initiated the following conversation:

“Who asked you to bring this in?”

I then received a lecture on how the inmates had lots of books, how the library was even better than the one in his daughter’s school, and a few other things I’d heard before. He gave the book back to me after class, and told me to take it home.

First, I learned who the real power brokers are in the prison. The administration loves to throw “thank you” dinners for the volunteers, and tell us how much they appreciate us, but when we go in at 5:30, they’re not there.

Second, I learned how hostile a prison–or any institution of control–can be to information that tries to undermine it. In the Times story, Chris Brook, legal director for the North Carolina A.C.L.U, is quoted as saying,

There is a particular perverse irony about barring a book about racism and mass incarceration from prisons in [the] state.

Not really. Large numbers of books are banned, for various reasons, and it’s not surprising that prisons would want to keep out any that might increase resentment and inflame racial tensions.

More importantly, though, The New Jim Crow, and other books that foreground the historical and cultural context of mass incarceration–e.g. From the War on Poverty to the War on Crime, by Elizabeth Hinton; Blood in the Water, by Heather Ann Thompson; and Disrupting the School-to Prison Pipeline, by Bahena et al.–pose a threat to a penal system focused entirely on the “rehabilitation” of the individual. Foucault, in Discipline and Punish, writes, “In short, penal imprisonment, from the beginning of the nineteenth century, covered both the deprivation of liberty and the technical transformation of the individuals.”

The students understand remorse and rehabilitation. They often talk about personal growth, changing their “mindsets,” and pursuing education as a way of “self” improvement. They attend workshops on “Alternatives to Violence.” They also like to engage, strongly, in discussions of free will and individual choice. Last semester, during a philosophy class, one student gave a presentation on the force of external, structural influences in our lives and our beliefs. The instructor later told me that the student “held his own” in the face of loud, negative pushback from the rest of the class. In my own courses, if anyone is going to start ranting about “systemic racism” and the “intentional failures of mass incarceration,” it’s likely to be me.

All this is not to say, of course, that the students accept the way the prison handles their “correction.” They’re well aware of the failures of the shuffling, bone-stupid regimen of humility and violence under which they’re forced to live. They don’t need me to tell them that they’re being groomed to fail, and probably wince–or laugh–when I do, as if I’m some kind of idiot prophet.

Self transformation occurs in spite of, not as the result of, the prison. In The Shawshank Redemption, Red says, when facing a parole board,

Am I sorry for what I did? There’s not a day goes by I don’t feel regret. Not because I’m in here, because you think I should. I look back on the way I was then: a young, stupid kid who committed that terrible crime. I want to talk to him. I want to try to talk some sense to him, tell him the way things are. But I can’t. That kid’s long gone, and this old man is all that’s left. I got to live with that. Rehabilitated? It’s just a bullshit word. So you go on and stamp your form, sonny, and stop wasting my time.

One of my own students put it a lot more succinctly:

I deserve to be punished, but I don’t deserve this.

View all posts by rmgosselin

RMGosselin is Associate Professor of English at a community college in western New York state.